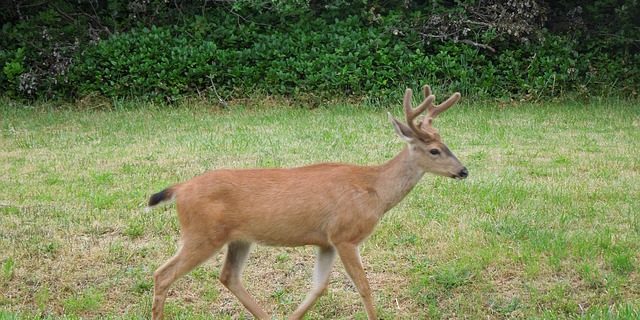 As a Washington DC native recently returned from 4 ½ years in Australia, I had forgotten the abundance of both plant and animal species on display in the Washington area. My delight at sighting a number of rabbits, a handsome red fox and a small herd of deer wandering through my yard was somewhat tempered in the weeks after my arrival as our newly planted garden was quickly demolished. I suspect the resident rabbits and deer were quite pleased to have me sow a number of tasty vegetables and herbs for them to feast on. Although I was quite happy to share with them, another downside of a ‘communal backyard’ with woodland critters presented itself when neighbours warned me to watch for deer ticks in the neighbourhood.

The whole subject was brought home to me in the past few months as a number of people have come in to the Smile Herb Shop where I work and have a clinical practice, asking for advice on how to keep ticks away or what to do if they find a tick on them. I have also had several clients who had been treated for Lyme disease but still felt symptoms of the disease. With a background in public health, I thought this would be a good opportunity to outline some facts about Lyme disease as well some strategies to prevent it. I have also included some herbs and foods to ally further symptoms post treatment.

Lyme disease was named for the town of Lyme, Connecticut after a misdiagnosed outbreak of rheumatoid arthritis affecting a large part of its population was found to be an infection with the causative agent, Borrelia burgdorferi (Bb) spread by the Ixodes spp tick (1).

This variety of tick identified with Lyme disease, goes through several stages and seasons of feeding on a variety of infected host animals.  These include mice, chipmunks, shrews and squirrels. It is from these animals, called reservoirs that the tick acquires the Borrelia organism and after moulting into adults, pass the infection onto other animals (most often deer) and humans (2). The explosion of the deer population in the North Eastern region of the US due to lack of predators and expansion of their habitat into urban areas is thought to be one reason for the increasing number of infections (3).

These infections are becoming increasingly common in all parts of the US but in 2011, 96% of Lyme disease cases were reported from 13 states: Connecticut, Delaware, Maine, Maryland, Massachusetts, Minnesota, New Hampshire, New Jersey, New York, Pennsylvania, Vermont, Virginia and Wisconsin(4). That our neck of the woods, folks!

Lyme disease, as reported by the CDC via state health departments, is currently the most prevalent arthropod-transmitted disease in the United States today with 24,364 confirmed and 8,733 probable cases recorded in 2011. From 1992 to 2009 reported cases of Lyme disease have increased 101% and it is thought many cases currently go unreported(5,6). There are many reasons for this increase including both heightened awareness of the disease, changing ecology of environment, increased distribution & numbers of vectors (carriers) and  human, animal and bird migration (7,8).

We all need to be aware of the possibility of a tick-borne infection particularly in the summer and autumn months when ticks are most active and we tend to share environments with them. Activities such as hiking, bird watching, plant collecting or camping in woodlands, canoeing, kayaking and fishing on stream banks can bring us in contact with ticks.  Also Individuals who work outdoors in jobs such as surveying, landscaping, forestry, gardening, and utility service have a higher risk of Lyme disease(5).

Preventative Landscaping, Protecting Ourselves at Home:

The ticks that carry Lyme disease and deer that carry them are more likely to live in wet, green, brushy, or wooded areas. Living near or visiting wooded or brushy areas can increase the risk (6) so:

Prevention of Lyme Disease, some pointers:

There are some simple guidelines to follow to help limit exposure. These include:

If you do find a tick:

Clinical symptoms of Lyme disease can be widespread and tend to come in stages. They most commonly first affect joints and muscles and the skin and at latter stages the nervous system and cardiovascular system.

This stage most often manifests with flu like symptoms such as fever, tiredness, headaches, muscle and bone pain and swollen glands, within two to four weeks of being bitten by an infected tick. Erythema migrans (EM), a characteristic ‘bulls-eye’ rash, called such because of its round pattern; red lesion usually 3-5 inches wide, at its centre expanding outward with a well defined border. It is seen in 35-60% of patients and appears two days to 1 month later, usually at the bite site (10, 11). It’s important to remember that a rash is not always present and shouldn’t be counted as a distinguishing symptom. Vague neurological symptoms such as mild confusion, insomnia, loss of mental acuity and memory loss are also sometimes experienced. (12).

It is possible to have localised swelling at the bite site after the tick has been removed. This is often an allergic reaction, which should resolve quite quickly after the tick is removed.

Ice can be applied to the site to relieve itching as well as Echinacea tincture or a paste of turmeric.

According to the CDC, some 10-20% of people treated for Lyme disease with prescribed protocol of 2–4 week course of antibiotics will continue to have symptoms of fatigue, memory issues or joint and muscle pain. Sometimes the symptoms can last for 6-12 months. Now known as “Post-treatment Lyme Disease Syndrome” (PTLDS), the exact cause of PTLDS is not yet known. PTLDS is differentiated from “chronic Lyme disease,” as people with PTLDS almost always get better with time. Unfortunately it may take months to feel like yourself again. Most likely, the lingering symptoms are the result of residual damage to tissues and the immune system that occurred during the infection. Similar complications and “auto–immune” responses occur following other infections (6).

Some studies point to this reaction as the possible reason behind why a small percentage of  people remain symptomatic and develop chronic Lyme disease. Symptoms can be variable with reports of long term muscle and bone pain, unexplained exhaustion, Bell’s palsy, poor mental acuity or memory loss and heart inflammation (12). Prolonged delay in treatment translates to poorer long term prognosis, making it all the more important for early treatment of  Borrelia b. infections (13).

Long term treatment with antibiotics for those with PTLDS and chronic Lyme disease does not seem to improve symptoms in the long run and can be counterproductive and cause serious side effects.

Because of this, I feel that symptomatic treatment with herbs and supplements plays a perfect role in the long term rehabilitation of those with unabated symptoms of Lyme disease.

The medical treatment protocol is straightforward and tends to work quickly in early Lyme or disease. The antibiotics of choice are Doxycycline, Amoxicillin or Cefuroxime for 14-21 days. Antibiotics are imperative as delay in treatment can result in significant long term symptoms (6).

My advice as a Clinical Herbalist, RN and public health educator is to combine conventional treatment with herbal symptomatic treatment.

Add in Anti-inflammatory herbs such as:

If muscle or bone pain is present:

My approach is to tailor a blend for whatever symptoms the client presents with so come & visit me for what ails you. In the meantime, watch out for those ticks!!!