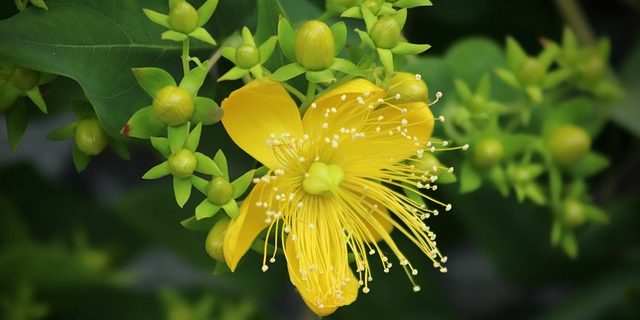 Here in the Mid-Atlantic, it’s been raining for weeks. With so little sun, many of us are starting to feel a little blue. Fortunately, there is a wonderful plant called St. John’s Wort that’s like sunshine in a cup!

St. John’s Wort herb, so named because it usually flowers around St. John’s Day in June, has been used for centuries to lift the spirits and purify the mind. Because it can increase your sensitivity to light St. John’s Wort is particularly helpful for the mild depression caused by too little sunshine. For those with Seasonal Affective Disorder or for those who live in dark or rainy climates, this pretty yellow flower can be a big boost.

For those of us who are sad for other reasons St. John’s Wort can be a big help too. Two active compounds in the plant, hypericin and hyperforin, may affect seratonin levels in the brain. For mild to moderate depression, some people believe that St. John’s Wort is as, or even more, effective than prescription anti-depressants. Be aware, though, that this powerful little plant should not be taken with prescription anti-depression or anti-anxiety medications, nor should it be taken while pregnant or nursing. Although St. John’s Wort is one of the most studied herbs in the Western world, its actions are still not fully understood. It is not recommended for severe depression or for other psychiatric conditions, and is best used for everyday relief of mild anxiety, stress, and sadness.

Medieval herbalists believed that St. John’s Wort protects against negative influence and malevolent spirits, and offers cheer to the heart. It certainly can lift the spirits as one cloudy, rainy day turns into another. Let’s hope the sun shines on us soon; in the meantime, perhaps a little St. John’s Wort will help!