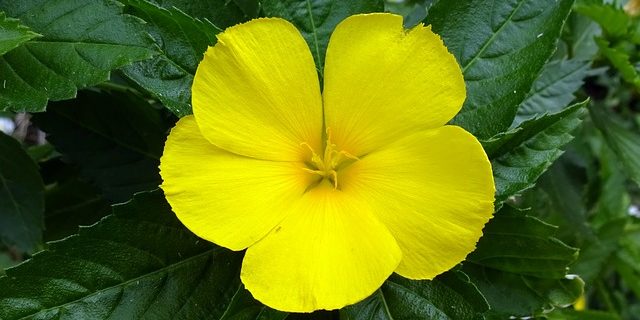 Herbal aphrodisiacs are as varied and numerous as the plants themselves. Some herbs, like Yohimbe, give the body an immediate “boost” of libido and work directly on the reproductive system. Other herbs are more nutritive; they work on a long-term basis to rejuvenate the reproductive system and the adrenals to build lasting energy and stamina. There are so many herbs that classify as aphrodisiacs, we can’t cover them all in one article! So this will be the first installment.

In our society, most cases of low libido are linked to stress, anxiety, and general depletion. Therefore, the best herbs for boosting libido are herbs that soothe, moisturize, and replenish the nervous system and the reproductive tissues at a deep level.

Damiana is an herb native to the southern United States, Mexico, and parts of South and Central America. It has long been known to possess aphrodisiacal and stimulant properties. Damiana is helpful for depression and anxiety, especially in matters of sexuality. It tones the central nervous system, uplifting confidence and helping to aid both in relaxation and stimulation.

Yohimbe is a tree native to the Atlantic evergreen forests of eastern Africa, stretching from southeast Nigeria to Congo. The bark of the Yohimbe tree is harvested and often powdered. Yohimbe is a stimulant aphrodisiac, invigorating the sexual organs, and it is a circulatory booster. We usually recommend it for occasional use only, 1-2 hours before sex.

Epimedium is native to China. Its catchy name supposedly derives from Chinese goat herders noticing an increase in sexual activity in goats who grazed on the plant. Epimedium supports the cardiovascular system and promotes strong circulation and blood flow. It is especially known to support stamina and performance in men.

Cordyceps is a type of fungi that promotes energy, adrenal rejuvenation, healthy libido, immunity, and many other health benefits besides. Cordyceps is another herb said to be discovered by farmers observing animals’ increased sexuality after grazing. It is a general tonic, adaptogen and “anti-aging” medicine known to boost energy levels and enhance stamina.

Maca is native to the high altitudes of South America and has long been used there as a general health tonic, especially in the Peruvian Andes. Maca is what is known as an adaptogen, which means that it helps the body respond to stress in a healthy way. Maca is a mood booster, nervous system toner, and aphrodisiac, helping to support normal energy, endurance, and a healthy libido. Maca powder can be added to smoothies and shakes for a slightly sweet, earthy herbal addition to your daily regimen.

Oatstraw or Milky Oat Tops are wonderful for longer-term nervous system rejuvenation and tissue moisturization. For low libido, fatigue, and mood problems, Oats can work wonders when taken regularly. Oats are rich in protein, potassium, magnesium, and trace minerals that relax and nourish the tissues of the body.

In Sanskrit, Ashwagandha means “smells like a horse”. This name comes partially from its strong smell and also from Ashwagandha’s ability to impart the sexual vitality of a horse. Ashwagandha is a classic Ayurvedic adaptogen, rebuilding the adrenal reserves for enhanced energy, stamina, sounder sleep, and a healthier response to stress. Like Maca and other adaptogens, Ashwagandha is best used over the long term for deep healing.